(Link to the Leader’s online copy of the article)

Hundreds of angry and sometimes volatile residents crowded into the Venus Reception Centre on Monday night to tell Kogarah Council what they thought of its proposed New City Plan.

Many doubted the council would take any notice.

Speaker after speaker said the public forum was just a formality which would do nothing to persuade the council to diverge from its plan to allow high-rises up to 11 storeys in many parts of the city and suburbs.

Speakers demanded that the plan — an LEP amendment to meet future housing needs — be returned to the drawing board for a fresh start more in keeping with the Kogarah lifestyle and the expectation of its residents.

END_OF_DOCUMENT_TOKEN_TO_BE_REPLACED

A well-informed resident speaking at the Public Forum, raised an important point in their verbal submission. Back in the year 2012, an amendment was made to Section 451 of the Local Government Act, which changed the law to allow councillors to vote on changes to planning controls they have an interest in, as long as that interest is declared.

The Minister for Local Government, The Hon. Paul Toole MP, made the following statement to the press less than a week before the Public Forum:

“Let me make this clear: the government will amend the relevant section of the Local Government Act to ensure councillors will not be able to vote on any matters in which they have a pecuniary interest.” (The Hon. Paul Toole MP)

END_OF_DOCUMENT_TOKEN_TO_BE_REPLACED 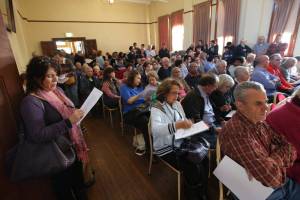 (Link to the Leader’s online copy of the article)

KOGARAH Council is planning to listen to the opinion of residents on the contentious New City Plan at a public forum held during an extraordinary council meeting on Monday, August 31.

The venue is the Venus Lounge in Belgrave Street at 7pm.

People wanting to speak at this forum must register by contacting the council before 4pm this Friday. Each can speak for three minutes.